Ready to Save Money? YES!
You are here: Home / Start Saving / YNAB vs. Mint: Why I Prefer YNAB Over Mint

It’s a classic dilemma for budgeting newbies: How is Mint any different from You Need a Budget (YNAB)? And why would I pay to budget on YNAB, when I can use Mint for free?

I understand. I once asked myself the same questions. In fact, I used to hate YNAB. I just didn’t understand it!

For years, Mint was the exclusive money app in my arsenal. It was straightforward, free, and required minimal input from me. Over time, however, YNAB became the only budgeting app that actually worked—and the only money-saving tool I couldn’t live without.

While YNAB isn’t free (it currently costs $84 per year), I vastly prefer YNAB over Mint. But I still use both! Here’s why.

This is the number one, most important reason why I prefer YNAB over Mint: it is active and intentional. I believe intentionality is the key to taking control of your finances, and your life. Because YNAB forces your active participation, it requires you to get real with yourself about your financial health.

For example, YNAB does not allow you to budget ahead with anticipated paychecks. So if you budget say, on May 31 for the month of June, and know you will get another paycheck on June 15…YNAB won’t let you budget that money. Why? Because you don’t have it yet!

Mint is more passive than that. Now, I can’t sing Mint’s praises for their budgeting tools, though Mint certainly has them. I’ve just not found success with them. And I think it has a lot to do with the fact that YNAB utilizes an “envelope” approach to budgeting, whereas Mint’s approach is more standard.

To me, Mint is the ineffective budgeting-spreadsheet version of budgeting apps, whereas YNAB is your very own personal financial advisor, calling you to tell you you’re completely over-budget for the month, and need to cover your overspending so you don’t go into debt.

Because YNAB forces you to participate, you get better results!

2. YNAB paints a more accurate picture of your finances than Mint.

The problem with Mint is the problem with simply looking at the numbers in your bank account: it’s not the whole picture. Even when you have all your credit cards and student loans linked to your Mint account, all Mint does is show you the amounts. So, if you’re already bad at budgeting, simply seeing all your assets and liabilities summed up won’t actually help you make any changes.

With YNAB, while you will certainly see the total amounts in your accounts on the sidebar, your budget screen—which is your main screen—shows you how much money you truly have available. That’s because YNAB forces you to “give every dollar a job,” meaning that once you assign all of your money to certain budget categories, whether it’s rent or savings, you have an accurate picture of your financial health for a given month.

That’s why, when I want to see how I’m doing financially, my first stop is always YNAB as opposed to Mint. Then I drill down as needed.

3. YNAB looks ahead. Mint looks behind.

YNAB is the only true, forward-looking money tool I’ve used. It’s no surprise to me, then, that I’ve had the most success with YNAB. Because YNAB looks ahead, it forces you to get real with yourself about your spending.

Do you really have the budget for new makeup this month? Can you really afford yet another new dress? YNAB forces you to plan ahead for all your financial decisions, and doesn’t let you off the hook when you mess up. The reason? YNAB forces you to “cover” all your overspending with money you already have, so you don’t go into debt!

And, as I mentioned earlier, YNAB doesn’t allow you to budget with anticipated income. You can only budget with the money you actually have. It might sound silly or overly strict, but trust me when I tell you: it makes a huge difference in how you approach spending and saving.

This is very different from approaching your finances from a backward-facing perspective. I remember when I used Mint exclusively, before I got really into budgeting, I used to get emails scolding me about my “unusual” spending in a given Mint category. But that money was already gone! It just didn’t help me.

YNAB’s approach forces you to get to know Future You, so you can be better equipped for planned expenses and emergencies alike.

4. YNAB is paid software, but Mint is filled with ads…for credit cards.

This is one of the things that drives me up a wall about Mint: I am constantly being pitched for a new credit card, bank account, or investment tool.

Don’t get me wrong; I, of course, understand why a free website needs to promote products to make money! But it is insanely problematic to me that Mint promotes credit cards—aka, debt—on a site that, ostensibly, is meant to help people pull their finances together.

And this isn’t just a banner ad, or something on the side of the website. These are targeted offers based on your credit score and financial state, right in the middle of the software, as you are using it. It even comes up inside of my list of transactions!

It’s always been icky to me, so it should come as no surprise that I’ve never used Mint to find my next bank or credit card.

Obviously, when evaluating YNAB vs. Mint, the fact that YNAB is paid software is certainly a factor. But if you weigh $7 per month to get your finances in order, and not to be pitched advertisements for credit cards, over only using free software with such ads…I think YNAB is the clear winner.

5. YNAB is devoted to budgeting. Mint does a bit more.

YNAB’s entire platform is devoted to budgeting. YNAB’s sole focus is changing your finances through intentional planning; a budget is the key. Mint, of course, does a bit more. While Mint does have budgeting functionality, that’s not the first thing you see when you log in. In fact, it’s not even something Mint pushes—at least in my experience (and I’ve used Mint for several years).

But there’s something to be said about Mint’s robust software. Because it pulls in so much information, you are able to evaluate the current status of your 401k or the value of your car in real-time. You don’t have to make those updates yourself; Mint does it for you. That’s not the case in YNAB.

And, along this vein…

This is the main reason why I still use Mint: it imports transactions—from bank accounts, to credit cards, to investment accounts—within 24-48 hours, max. It even shows pending transactions. YNAB does not do that.

But this isn’t a real ding against YNAB. Because Mint is so good at keeping your accounts fresh and updated, it operates as a stellar counterpart to YNAB. The reason? YNAB’s import system is notoriously slow. Lots of users add every single transaction manually.

I do a little bit of both. I allow YNAB to import at its glacially slow pace when necessary, but I also import transactions manually and “match” them once YNAB imports them. And I reconcile regularly, to make sure everything matches up!

One other thing to note: for YNAB’s “tracking” accounts—meaning your 401k or student loans, for instance—you really need to update those manually and reconcile regularly. Even if you’ve hooked those accounts up to your investment or loan providers, YNAB just doesn’t update properly the way Mint does.

7. YNAB aims to change your behavior. And it actually delivers!

At bottom, YNAB is a financial tool whose goal is to change the way you think about, treat, and act on your money. It aims to change your behavior. And it actually does. Once you’ve used YNAB for a month or two, you will start to notice a real shift in your mindset.

If you’ve ever used Mint, you will know that’s not the case. That doesn’t mean Mint is useless; far from it. Instead, Mint is simply another tool you can use as you pull your finances together. It just won’t be your best tool.

When it comes to a question of budgeting with YNAB vs. Mint, it really is all about you: your needs, wants, and dreams. But I truly believe some budgeting tools are better than others, and YNAB takes the cake. I still use Mint as a complement to YNAB, but if I had to choose one, it would always be YNAB: my one true financial love.

want to remember this post? pin it for later!

96shares
Previous Post: « 7 Approachable Minimalism Strategies to Stop Shopping
Next Post: How to ROCK Your No Buy » 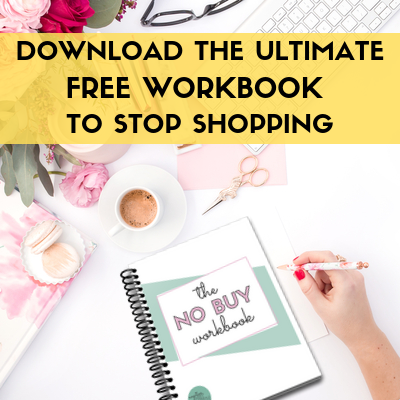 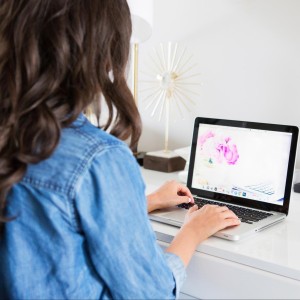 Hi! I'm Katherine — reformed shopaholic, millennial professional, and student-loan warrior. At Negative Net Worth, I'm here to teach you about money, and how to stop setting it on fire. Click here to learn more. 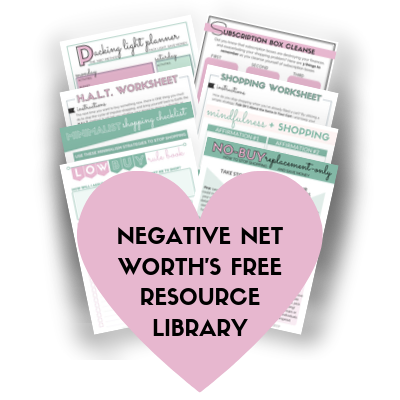